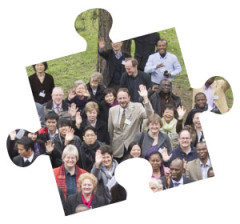 How are the Protestant Regional Churches structured?

Most Germans are Christians: 26 % are protestants, 28 % are Roman Catholics and 3 % are members of other churches.

Together, the 20 Protestant Regional Churches form the EKD (Evangelische Kirche in Deutschland), which has 21.5 million members in 14,000 parishes. Most of them are members of the parish they live in. There are Lutheran, Reformed and United congregations.

Each congregation is governed by a council (“Kirchenvorstand”, “Presbyterium”, “Gemeindekirchenrat” or a similar name), formed by elected Elders and the Pastors. The Pastors hold a Masters Degree and are paid by the Regional Church.

The Regional Churches support the congregations and are responsible for other church affairs such as education, counselling, church music, work with children and young people or diaconate. They represent church interests in politics, in society and with other religious groups.

All Regional Churches are governed by a synod (church-parliament), which elects the Bishop and other church dignitaries. Democratic elections, equal rights of men and women, open discussions and transparency are important in Protestant Churches.

In Germany, the EKD supports the Regional Churches and represents them in public. The EKD is also governed by a synod and an elected honorary Council (Rat der EKD).